The effluent that didn't smell

Farming is the management of complex biological systems, systems we do not fully understand. Agricultural science is the process of trying to understand those systems better, little by little. But there is much we still do not know. The most exciting science is when you have an interesting observation, and try to figure out what is behind it.

The mystery of the missing smell

Several years ago I was approached by a dairy farmer who had been applying extremely low rates of N fertiliser, yet achieving levels of production per hectare that were equivalent to high input conventional farms. He had noticed that his dairy sheds smelled different to neighbouring conventional farms - there was considerably less odour of effluent. At the same time, he had noticed that the pasture did not appear to respond visibly to effluent application as much as would be expected under conventional management.

The farmer wished to understand whether his management system was actually changing the composition of his farm dairy effluent (to check it was not just imagination), and what this change might be.

The effluent from conventional farms smelt clearly considerably more pungent than from the low-N farms. To verify this, I conducted a blind odour test - I had some volunteers with sensitive noses (my wife and older children!) smell all the samples and order them from most to least pungent. I have a tolerant family… They clearly identified the conventional farms as being considerably smellier than the low-N farms. This confirmed the farmer’s original observations.

On analysis, the effluent samples were starkly different. Compared to the high-fert conventional farms, the low-fert farms had:

The differences were stark and much greater than I had anticipated. 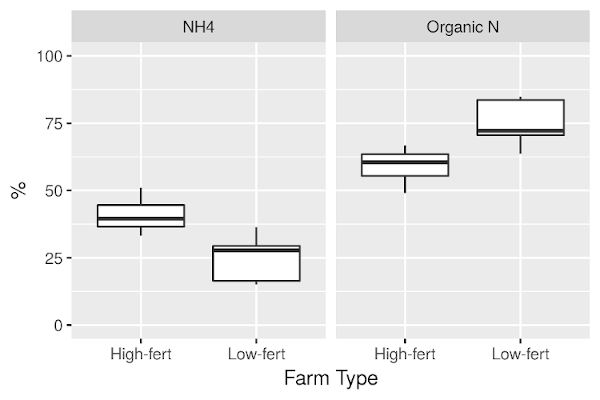 Why was the effluent different?

It seems incredible that changing N fertiliser rates could have such a far-reaching impact. Fertiliser has to be dissolved in the soil, processed by microbes, taken up by plants, eaten by animals, processed in the rumen, nitrogen absorbed and used through the body, processed in the kidneys, excreted as urine and dung, before ending up as effluent. This is a very long chain of processes. It seemed incredible that a change in fertilser application at one end of this process could have major impacts at the other end. But the results were unmistakably clear.

This is most likely due to a lower nutrient density in the grass with higher rates of N fertiliser.

A higher rate of N fertiliser boosts plant production, and supports plant N content, but may dilute the concentration in the plant of all other nutrients - including P. Note that we did not analyse pasture, only effluent, so this is an educated assumption based on other studies that have found similar effects.

We all observe that store-bought and industrially produced fruit just doesn’t taste as flavoursome as home-grown fruit, and this is largely due to commercial orchard management using artificial fertilisers to increase production, while a tree in a residential property generally receives little or no fertilser (often just compost). The home orchard often produces less fruit, smaller fruit, fruit that is eaten by insects - but fruit that tastes fantastic, because it is rich in nutrients. It is reasonable to assume that the same is happening with the grass these cattle were eating.

If we assume the grass on the low-N properties is more nutrient dense, the results all begin to make sense.

The higher P concentration in low-N property effluent is due to a higher P content in the grass. Note that this will not be due to higher P fertiliser - if anything these properties would have lower P fertiliser. It will be due to the biological processes in the soil and plants.

These microbes will consume the ammoniacal N from urine, and tie it up in microbial biomass. This explains the lower ammoniacal-N content on the low-N properties, and the higher organic N. These biological processes can also explain the lower pH of this effluent.

Why did it give a different pasture growth response?

Effluent from the high-N farms contained more ammonia and ammonium. This N is immediately available to plants, and would be expected to quickly affect plant colour and growth. It will therefore give a more visible pasture response.

However, there is just as much N in the effluent from a low-N farm, this is just in organic forms. This will be released gradually over time, and also used for plant growth. It will not cause as much of an immediately visible pasture response, but would cause at least as much total pasture production, just spread over a longer period of time.

Effluent from the high-N properties would be expected to result in higher ammonia gas emissions.

Ammonium can be rapidly converted to nitrate in soil, and then lost by leaching. Organic N must go through a longer series of biological processes before being lost - it is essentially a slow-release fertiliser. So even with the same total N application rate, the effluent from the high-N properties would be expected to have higher leaching losses than the effluent from the low-N properties.

Farms are very complex biological systems. One apparently tiny change - the use of N fertiliser - can have far-reaching implications that were not originally anticipated. Natural systems are well-balanced, and every time we add an artificial intervention into them we can disrupt the balance of that system in unexpected ways.

The effects noted in this report are not accounted for in models of nutrient leaching loss. Reducing N application rate in a model like Overseer will reduce estimated N leaching losses to some degree, but the actual reduction could be a lot larger if all the flow-on biological effects were accounted for. However, biological systems are far too complex for us to ever be able to account for all factors in a computer model.

If you are in a particularly smelly dairy shed, ask the farmer what their fertiliser rates are.